ALL THE FOLLOWING COURSES ARE HELD IN THE ANNEX, TORONTO.


@My Studio one can always count on a first rate projected image in a well darkened room.

"GENIUS IN FOCUS" HAS BEEN REPATRIATED


What is "Genius in Focus"?
In my "Genius in Focus"  or "Genius" courses pivotal works from the history of Western art are analysed in detail. One painting is dicussed in each lecture. I place these paintings historically and artistically, explaining who influenced their creators and whom their creators influenced in turn. My lectures will treat the pieces technically, symbolically, culturally and psychoanalytically. Each series is chosen for its politically interesting subject matter, subject matter which often foreshadows issues we are dealing with today.  I am particularly drawn to paintings that have inspired interesting and innovative contemporary research.

In honour of the upcoming 100th anniversary of WW1 I will be offering these special WW1 Art History lectures. Locations, dates & times will be announced in the new year.

Art From 1914 to 1919: Not just Matisse & PicassoIn this lecture Suzanne will discuss the remarkable variety of work that was created during the war years. We will consider works of art by Matisse, Picasso, Kandinsky, Nolde, Kollwitz, Stanley Spencer, The Blue Rider Group, even the Bloomsbury Group and Canada’s own Group of Seven.


War Art in Canada & The Empire: Artists in The Trenches Anyone who has ever visited a war museum will understand the remarkable task artists were set when sent into the trenches with nothing more than their paints, canvasses and easels. Art done by these sensitive individuals will move and fascinate you. Join Suzanne for an enlightening visit into the chaotic world of our forebears at war


WW1 Propaganda Art: A look at both sides War propaganda art is an astonishing and important part of maintaining the strength of the populace whilst at the same time attempting to destroy the confidence of the enemy. For these reasons some bizarre and terrifying images have been created. Suzanne will discuss a selection of these images, from both sides of the WW1 conflict.


Art Out of War Explore art arising in time of war through a consideration of major artists and their works; Goya, Manet, David, Rembrandt & Picasso. Also considered will be art created in reaction to the Anti-Apartheid movement, Abolition Movement, Holocaust, Middle East conflict and conflicts that resulted from USSR dissolution.

A Series of Ten Thematic Lectures
Art: Reflections on Society

ART & PRACTICE
This exciting new course creates a true appreciation of the Artist's world by combining the best of Art History with actual practice in the artist's studio.  Evenings of lectures on the History of Art will alternate with evenings of art making. One of the best ways to understand Art is to try it yourself.....  this develops both your analytical and intuitive sides and will lead you to a fundamental realisation of what Art is all about.
6 week course.
The art supplies used during the studio classes will be included.
1) Impressionism: Renoir & Monet
2) Impressionism studio: chalk pastel on paper
3) Post Impressionism: Gauguin & Van Gogh
4) Colour field painting studio: acrylic on paper
5) Cubism: Picasso & Braque
6) Cubism studio: collage & ink on paper


FROM DRAWING TO PAINTING
An 8 week course


The use of ancient and modern techniques in two dimensional mixed media will be demonstrated over a series of 8 studio classes. The course begins with a slide lecture introducing the techniques as used in ancient and modern times. Gold and silver leaf, silver point drawing, collage, decoupage, (encaustic/intaglio when possible) found objects and painting with different media in a single work are some of the techniques that will be incorporated. As well you will learn different methods of creating textures and built up surfaces including distressing and carving into two dimensional artwork (with Dremel type power tools when available). How to plan and prepare a work using multiple techniques will also be discussed. Each class will focus on a specific group of techniques and participants will each create one finished work incorporating all or most of the methods covered.
An 8 week course 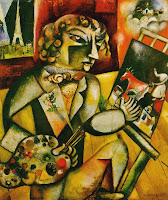 I fell in love with Chagall during the many lecture tours I gave at the Chagall Museum on the Cote d'Azur, and you will too. Humour, folklore, innocence and colour combined to create one of the most popular artists of the 20th century. Pablo Picasso said of Marc Chagall, “When Matisse dies, Chagall will be the only painter left who understands what colour really is." We will discuss the great Russian artists that matured alongside Chagall: Kandinsky, Goncharova, Rodchenko and Malevich. Culturally more eastern and exotic, the Russians coloured and refined the cosmopolitan approach to art that the artists of the French capital had dominatedduring the early years of the 20th century.
6 weeks

BEYOND FRENCH IMPRESSIONISM The Impressionists opened the floodgates of artistic innovation and experimentation and things haven't been the same since. This course will assume a familiarity with Manet, Monet, Degas and Renoir, though they will be reviewed briefly, and will commence with a discussion of the "other" Impressionists, such as Sisley and Pizzarro. We will then take an indepth look at the Post-Impressionists, the Fauves, the Symbolists, and the Expressionists, as well as other major artistic movements of the 19th century, ending just before Picasso.


A HISTORY OF ART: From Cave to Condo:
I've had a few requests for an overview of the history of painting from the cave paintings to Vermeer, to Picasso to Banksy. I have decided to respond with a series of 10 or 20 lectures.