"Messengers During A Time of Pestilence",

Very close to done. I'm very pleased. This one was hard work. 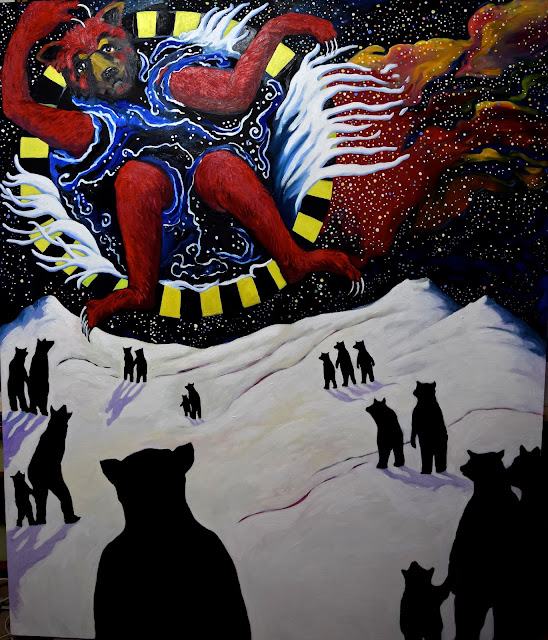 I am so close. Stand by 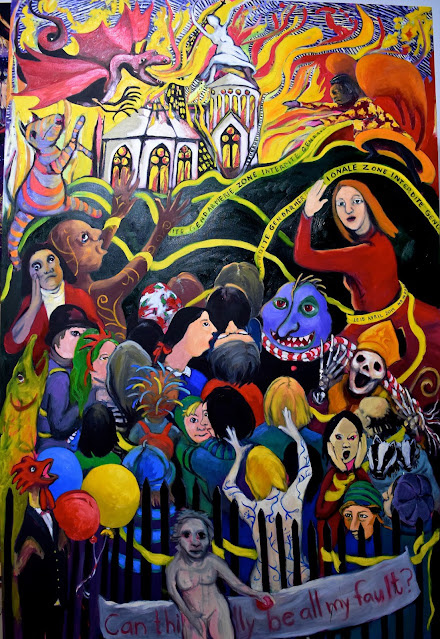 This baby is done!!!

Messengers During A Time of Pestilence: MooseMan Spirit 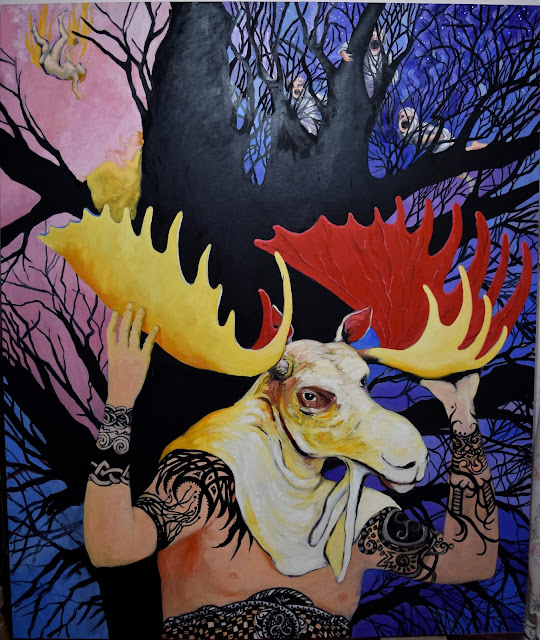 March 28, 2020
Working hard and trying to stay healthy.
Please do the same.
It would seem that Pythia has decided
to arrive on Innaarsuit Island, Greenland
as the skateboard queen.
Just sayin'
I'll keep you posted.... 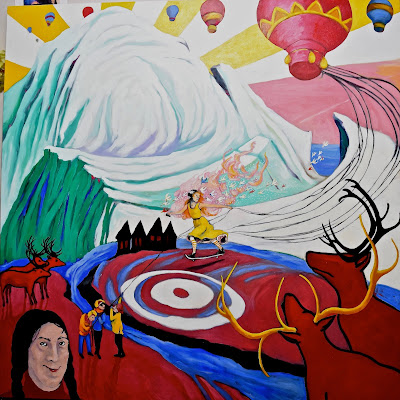 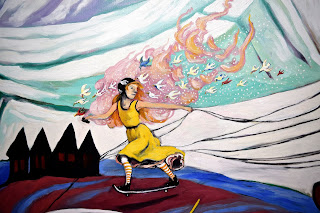 The second painting "Pythia & The Iceberg" has Pythia arriving, via hot air balloon, on Innaarsuit Island, Greenland, as a giant iceberg, taller than Big Ben, threatens to overwhelm all living there during the summer of 2018.

Working on the storm, and Pythia, who presents herself to us as "the woman clothed in the sun". I'm having a wonderful New Year's Day! Played a few little Chopin ditties, a prelude and a waltz, this morning. Getting my musical mojo back into shape....I'll attack the nocturnes later this week, and move on to Rachmaninoff once my fingers get back into shape. Don't you just love the feeling of rejuvination that the New Year brings. 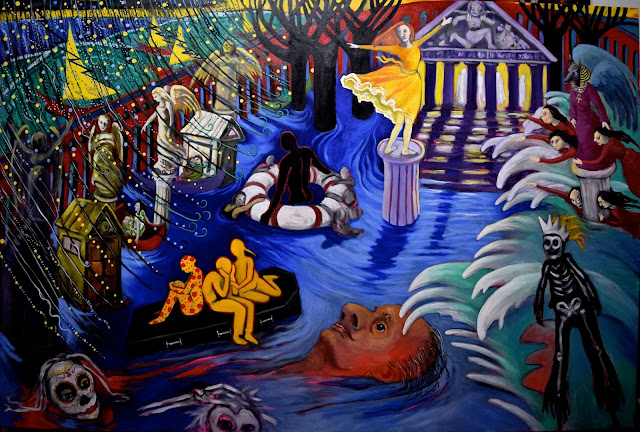 Just started my new and probably last work in my current series “The Adventures of Pythia, the courageous Canadian girl, as she tries to save the world.” "Pythia & The Iceberg" has Pythia arriving, via hot air balloon, on Innaarsuit Island, Greenland, as a giant iceberg, taller than Big Ben, threatens to overwhelm all living there during the summer of 2018.


This painting is 60” X 60” (5ft X 5ft), and is oil on canvas. Not sure when it will be done, but I made enormous headway over the last few days. Christmas is always a very creative time for me.


This painting is inspired by the Christmas Eve, 2017, birth of baby white rhino, Theodore, at the Toronto zoo, and the adventures of Clara the rhino, born in 1738 in India and painted by Pietro Longhi. Miss Pythia meets the mother rhino and baby Theodore at a Venetian Ball. 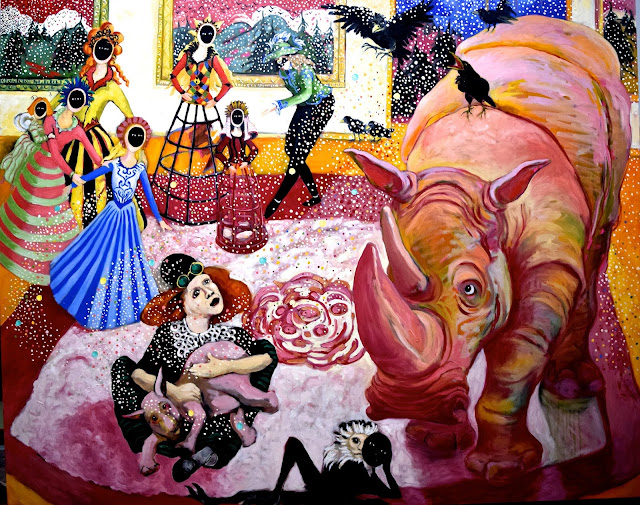 
Well, I'm back to work on "The Christmas Eve Baby".
It is inspired by the Christmas Eve, 2017, birth of baby white rhino, Theodore, at the Toronto zoo, and the adventures of Clara the rhino, born in 1738 in India and painted by Pietro Longhi. Miss Pythia meets the mother rhino and baby Theodore at a Venetian Ball.
It is 48" X 60" X 2" oil on canvas..

"Miss Pythia in Paris as The Seine Breaches Its Banks" (work in progress, very close to done)
oil on canvas
5ft X 5ft 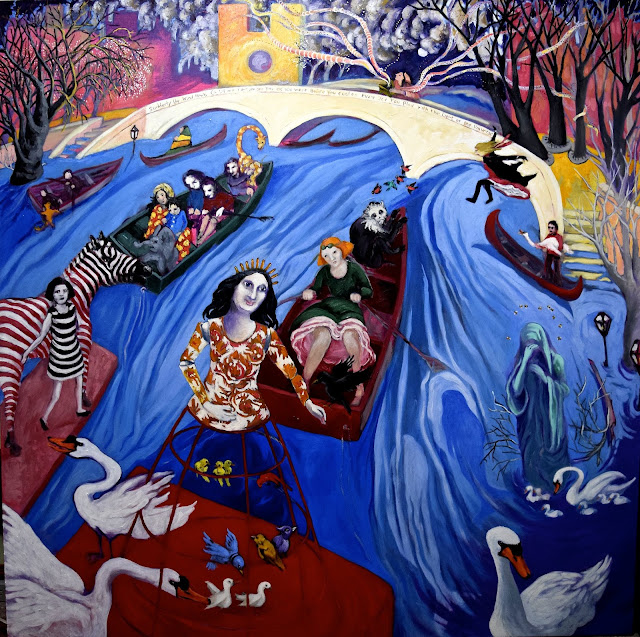 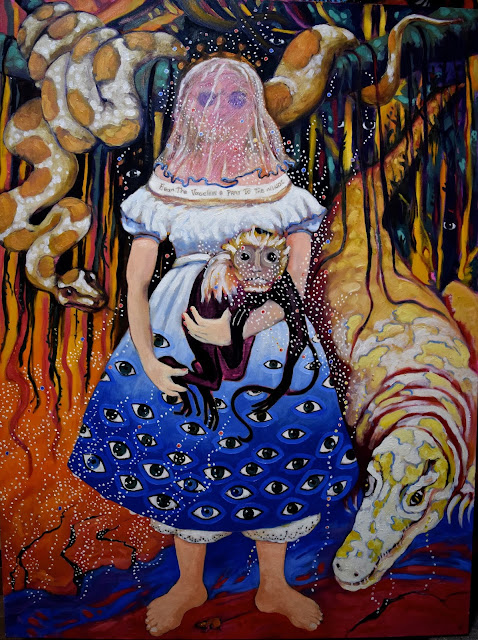 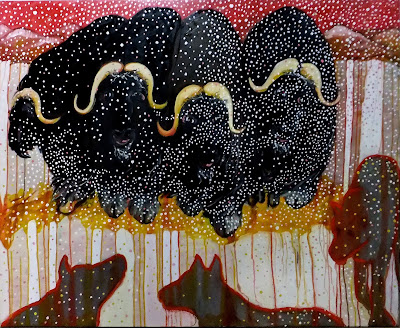 Taking a short break from the animal kingdom.
My new painting, which will be done shortly, may be called Ophelia Passing The Children, or perhaps
Ophelia's Lament as it has a certain operatic feel to it, in my opinion.
It is oil on canvas, 48" X 72" (4ft X 6ft).
It's very hard to photograph - either the bottom half is clear or the top half is clear.
The little dots and dashes are fireflies.
Did you know Ontario has had particularly splendid firefly colonies this summer? 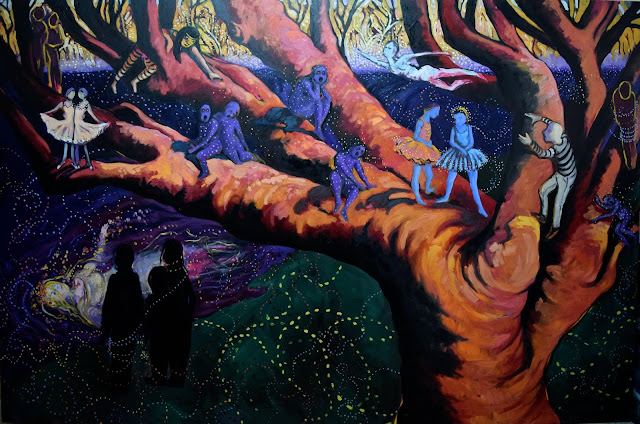 July 16
Well, "The Bears Picnic: Be Sure of A Big Surprise"
(oil on birch cradle, 104" X 64" X 2") Is about half way done.
At this point you can get an idea of where it is headed. This is the second large work about the lose of the natural/traditional habitation of Canadian bears.
It'll be done in a couple of weeks.

July 19
I've added a blue jay and some racoons to  the picnic because they are urbanites,
just as the bears are becoming. 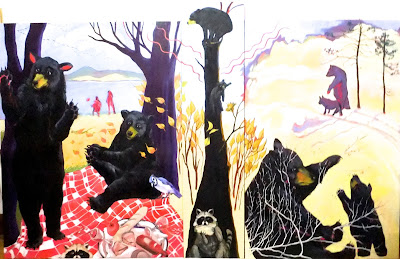 "The Polar Bear's Farewell: If You're Skating on Thin Ice You might as Well Dance"

I imagine I will finish this in about 10 days.

July 21 - Been busy with the Bears Picnic, but today I worked on Polar Bear. I wanted to have some stars glimmering in the distance, plus a bit of drama, so after some research I was able to add a favorite meteorological event, a bolt of lightning. Did you know that thunder and lightning
are symptoms of global warming? Normally they would not occur in the Arctic. 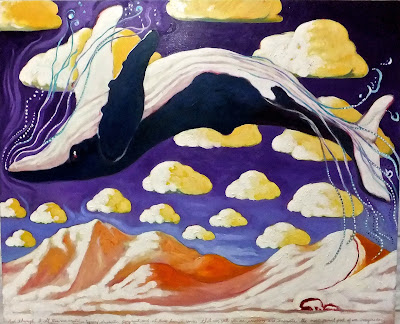 
Yesterday & today I worked on the winds faces.

The 3 text sections are: Verses from Mon Pays, by Gilles Vigneault (the best & most accurate description of the Canada I know & love), references to the Aurora Borealis from Shakespeare, Milton, Dryden & Homer, and an excerpt from Dr John Rae's letter describing his search for the bodies of Franklin's crew. 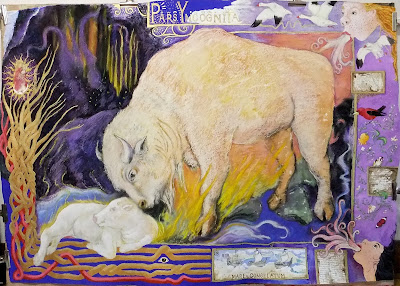 "Moose #6: The Christmas Painting" is starting to take shape. It's oil on birch cradle, 2 panels, which together measure 5ft wide X 4ft. Still a while to go yet, but should be done in a month or so.

Started the White Buffalo Calf yesterday. A New Year's Eve painting-very auspicious wouldn't you say? Now the buffalo painting is going to be a lot of work...there are 2 of them... mom & baby. Madonna & child. AND they will be beautiful. It's on that giant hand made paper I bought in Paris - like my last moose. The featured map that I will be using was created in 1618 by Domingos Sanchez.

"Moose" aka "I have called you by your name: You are mine" will be going to the framer's first thing tomorrow & then to his new home. He's big, my Moose - 48" X 68" in the shadow box frame, which is an architectural delight.


August 22, 2016. Things are going swimmingly. Close to being done. Sometimes I have to work flat so I put it on the bed-I don't have 6 x 5 feet of clear unencombered floor. I had this paper - the largest handmade paper in the world, I am told - sent to me from Paris. It's over 5ft wide and 4ft high. So far it's dry pastel, acrylic wash and  charcoal. The map in the background is a loose rendition of a 1722 map of Nouvelle France. The moose is piebald, part sacred sprit moose and part run of the mill, hanging around the garden moose. A bit like most Canadians I know, don't you think? I love this moose. 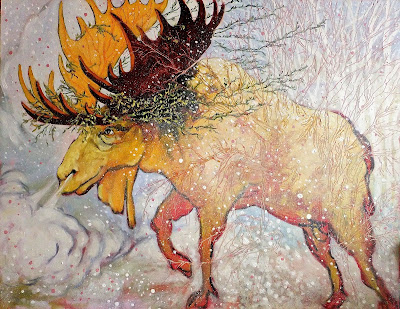 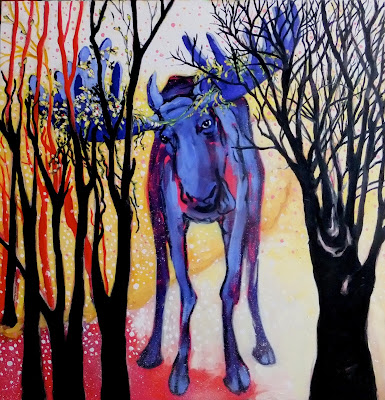 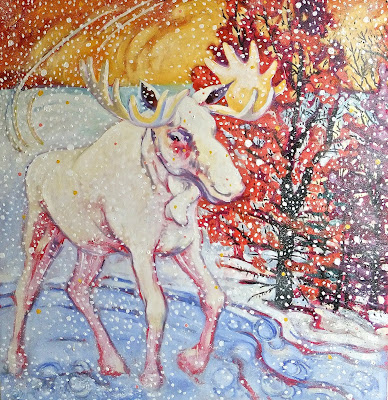 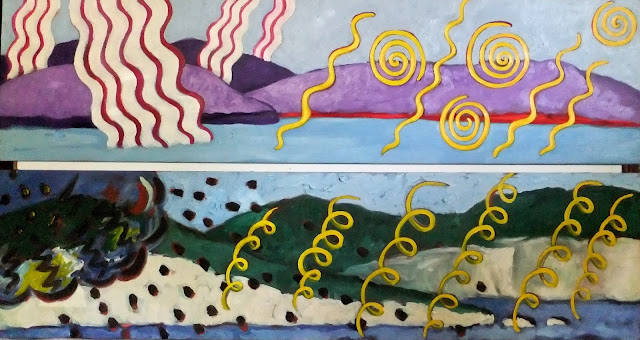